UWRL Director, Mac McKee, hosted Dr. Hossam El-Din M. Moghazy on a tour of the Utah Water Research Laboratory facilities on Thursday, July 14, 2016. Dr. Moghazy served as Egypt’s Minister for Water and Irrigation from 2014 to 2016 and is a professor of irrigation and drainage engineering at Alexandria University in Egypt. 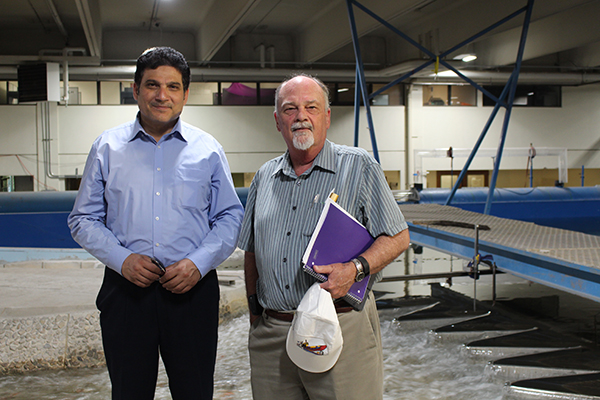 According to the Atlantic Council (2014) “Moghazy has worked as a professor at Alexandria University since 2000, specializing in Irrigation and Hydraulics. He wrote his Master's thesis on groundwater hydrology in Wadi al-Natrun, and a PhD thesis at London University on the optimal design of wells to exploit groundwater in arid regions. He was made head of the irrigation engineering department in 2010. He has also worked as a consultant to the irrigation ministry on several projects and his work has appeared in more than forty publications relating to engineering, groundwater irrigation, drainage and protection of the aquatic environment.”