AggieAir has a strong history of research flights across the Western U.S. since 2009, and have been as far afield as the headwaters of the Kuparuk River basin in Alaska and Christchurch, New Zealand. These research flights have focused primarily on issues relating to natural resource and precision agriculture. Learn more about our projects on the interactive map below. Please contact Ian Gowing to discuss how AggieAir can meet your research needs. 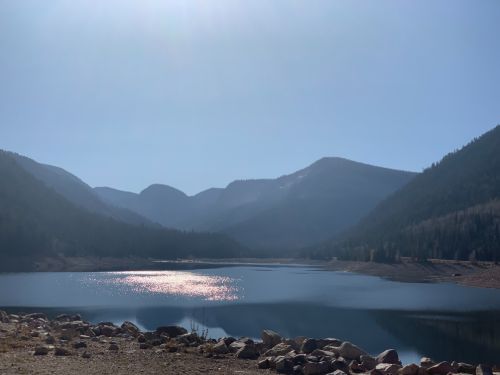 AggieAir partnered up with the Belmont Hydrology and Fine Sediment Lab to study how wildfires are affecting current sedimentation rates and Utah's reservoir water storage. Because of the vast size and depth of the chosen reservoirs, AggieAir was brought on to capture, at a very high spatial resolution, the topography of the exposed reservoir shoreline and large exposed deltas. Initial reservoirs mapped include Upper Stillwater Reservoir, Smith Moorehouse and Little Dell Reservoir. The team plans to survey four additional reservoirs in the Weber River watershed in the next year, providing more sedimentation data to decision-makers in that area. Learn more in our featured Utah State Today article. 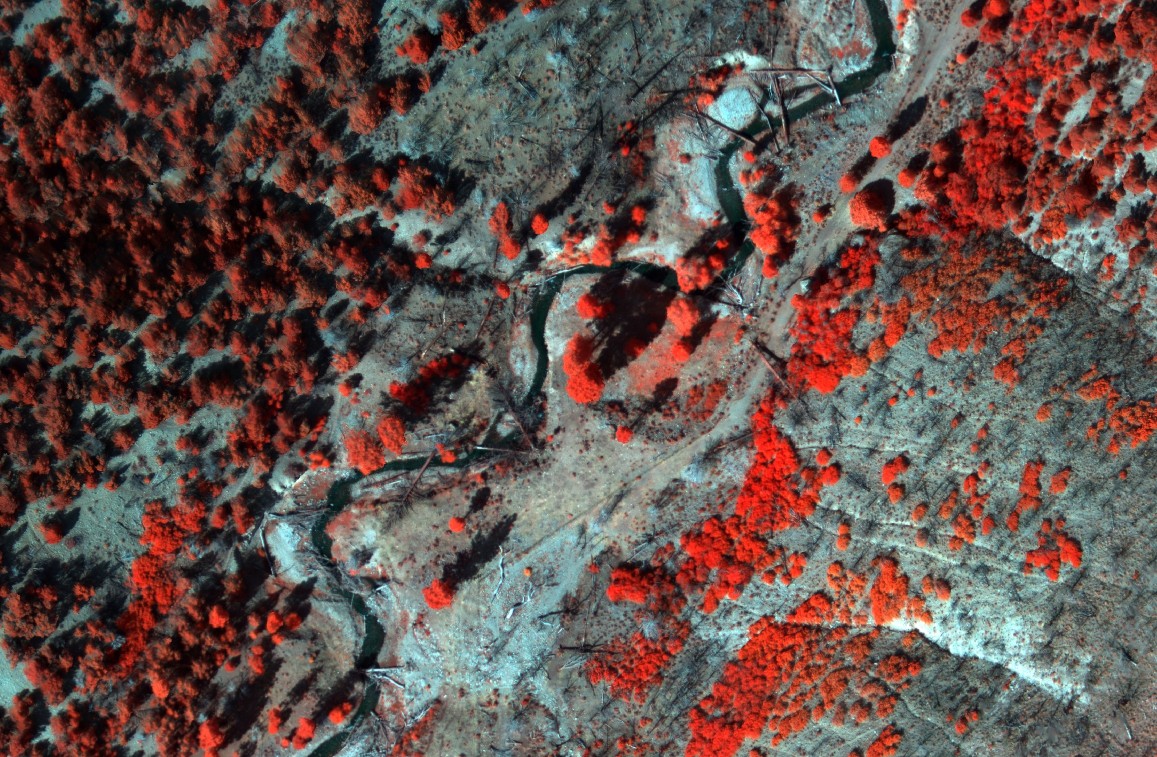 This cooperative project with the Utah Division of Wildlife Resources, Forest Service Fishlake National Forest, and the Geospatial Technology and Applications Center aims to develop riparian land cover and in-stream feature maps based on high resolution aerial 4-band imagery to aid in the recovery of three streams within the Fishlake National Forest. Erosion prone bank features will be identified and channel morphology changes compared to earlier Lidar imagery will be analyzed. As water temperature is a concern in all three streams, a surface water temperature map based on thermal infrared imagery will be developed. The geospatial products developed for this project will also serve as a baseline to measure future changes, and help to improve management actions. Project COA: 2015-WSA-91 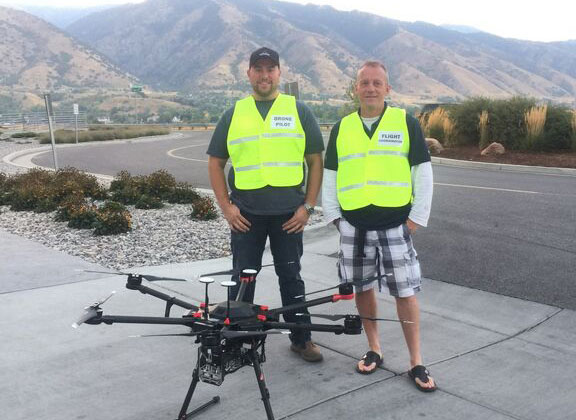 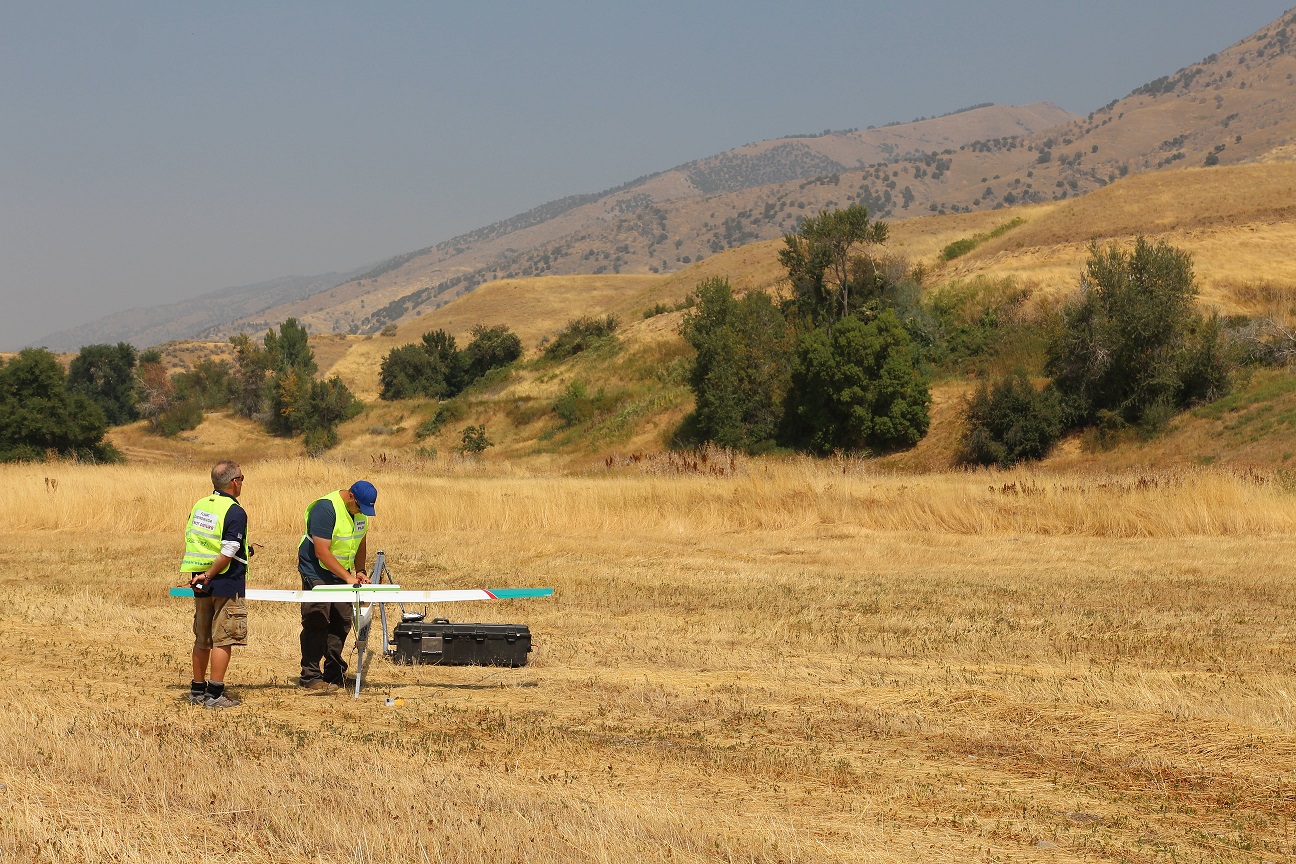 AggieAir imagery is being used by water resource researchers, Nibley City, and Trout Unlimited to identify flow and temperature variability in a portion of the Blacksmith Fork River. Along with other data, AggieAir imagery will provide detailed information about channel bathymetry and an understanding of the spatial variability of temperature during low flow, high water demand summer conditions. The completed study will allow for more accurate assessments of trade-offs between instream flows and fish habitat availability. 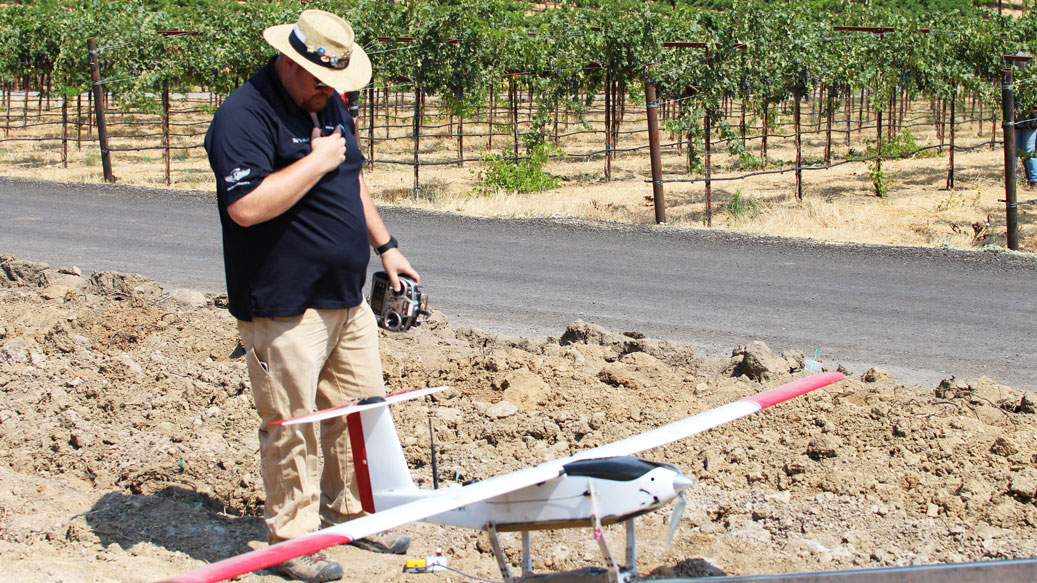 As part of on-going efforts to develop remote-sensed information for crop and water management by E&J Gallo Winery and ARS-USDA, the USU AggieAir Service Center was invited to provide scientifically calibrated, high-resolution aerial imagery (0.15cm/pixel) for estimation of vine water use, soil moisture, yield and other products that can allow a detailed management of vines farms in California. The high resolution imagery can also be used as ground truth to validate remote sensing products from satellite sensors (e.g. Landsat, 30m/pixel).

The purpose of this proposed study is for the timely acquisition of high resolution multispectral aerial imagery of Eurasian Watermilfoil (Myriophyllum spicatum), a non-native invasive aquatic plant which is prevalent in Fish Lake, South-Central Utah. The imagery captured using AggieAir will be used initially by agencies to map the presence of aquatic vegetation including milfoil along the western shoreline. A change detection scenario will be developed to investigate the response to the impact of the milfoil weevil (Euhrychiopsis lecontie), a native beetle introduced as a biological control. 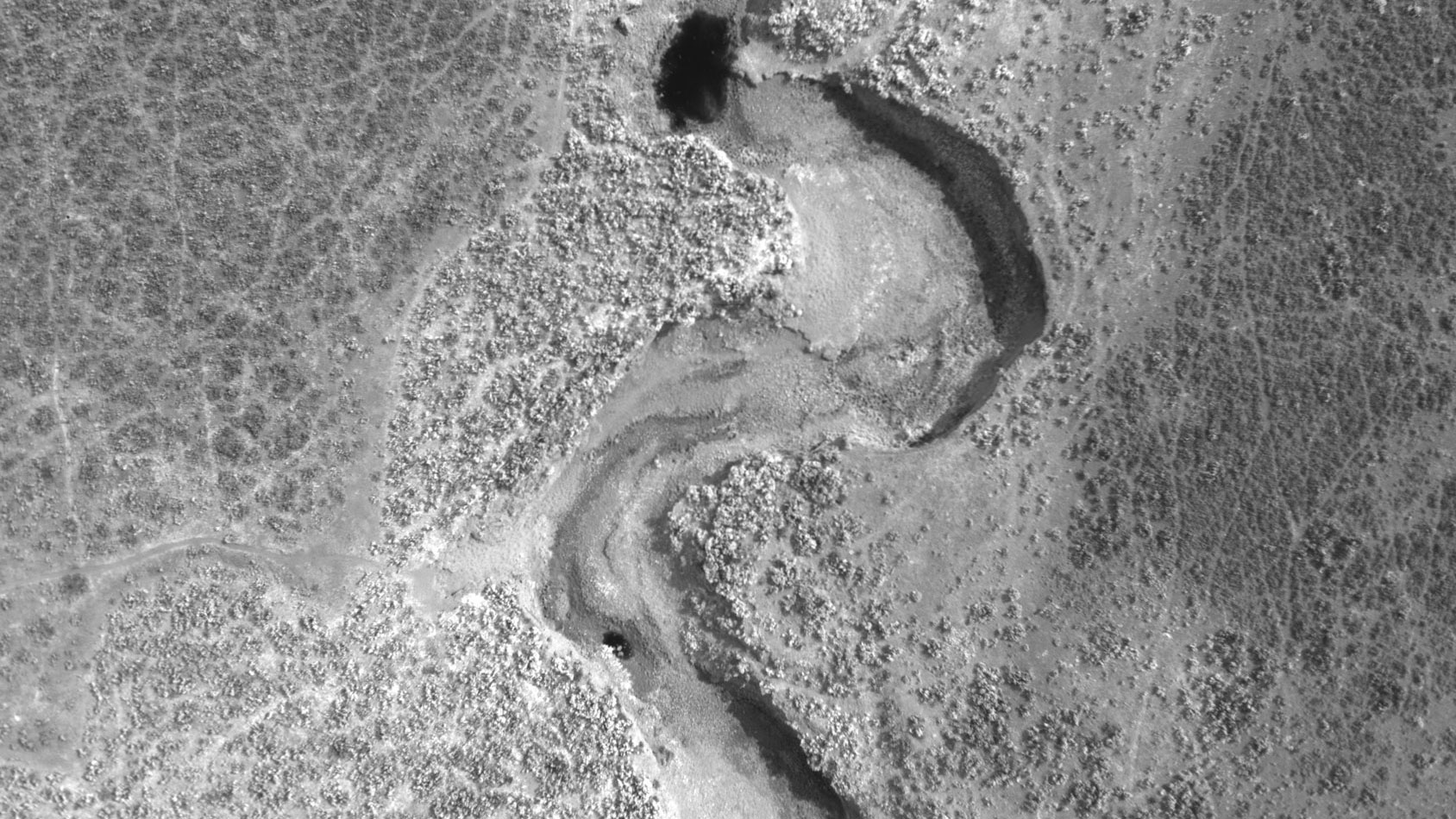 AggieAir imagery was used to identify critical habitat for the Northern Leatherside chub during periods of low flow within Yellow Creek, a major tributary of the Bear River during 2016. Habitat degradation, fragmentation, and loss from water development programs are significant threats to the northern leatherside chub population. The imagery will be analyzed in 2017 and onwards by Nature conservancy and other agencies to investigate and assess the mesohabitat availability with the lower regions of Yellow Creek. Read the recent KSL news article about this topic. 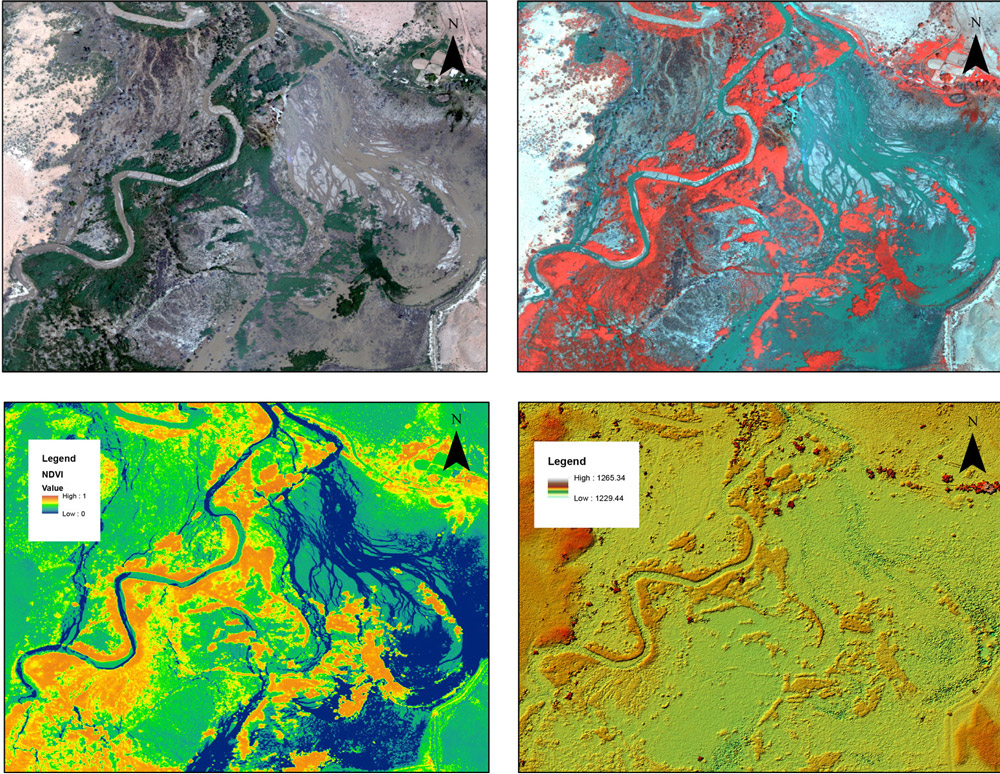 The focus of this research project was primarily on image processing and data analysis of aerial imagery captured along the San Rafael River, South central Utah. The computer software, Agisoft, will be used to create orthorectified mosaics, digital terrain and surface models. It is anticipated that this data will be used as a comparison data set to data collected from a LiDAR flight over an identical region of the San Rafael River. Analysis will focus on how closely data results from Agisoft point clouds to establish both DTM’s and DSM’s, compare to the information captured from a previous LiDAR flight. 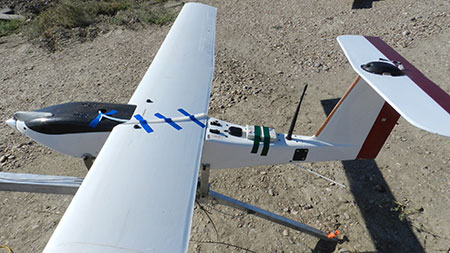 We have just finished processing the data from our flights over the Great Salt Lake on August 11, 2015 (COA 2014-WSA-165). During this campaign, a customized Ozone monitor was flown at four different times throughout the day in a designated flight path from Promontory Point out over the Great Salt Lake and back in a vertical grape vine pattern. The data collected from these flights is helping to further the understanding of what the Ozone does to the lake effect on the Great Salt Lake. 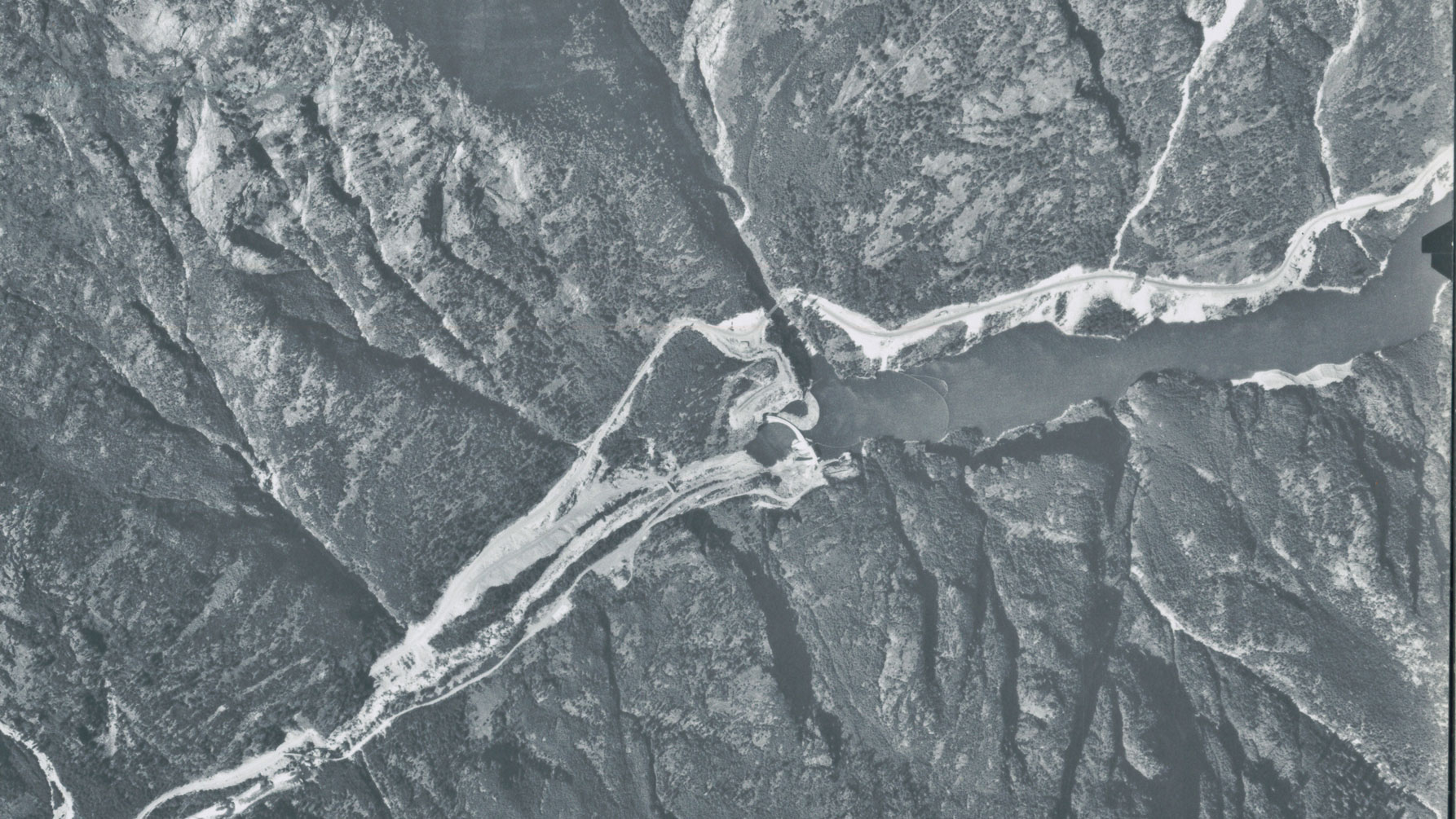 The AggieAir Service Center was contracted by the Mt Baker Snoqualmie National Forest, Forest Service to create othorectified mosaics from historical aerial imagery flown over the South Fork Stillaguamish River, WA, between 1946 and 2013. Hard copy aerial imagery was supplied by the Forest Service and the imagery was scanned and processed using Agisoft. The final delivered product to the Forest Service was a series of orthorectified mosaics, including digital terrain models and digital surface models.